What I Made Over The Weekend

I did have a bit of inspiration that actually motivated me to make something! I think I'm just suffering from cold processed burnout. So I've gone back to my humble beginnings of melt and pour, and I've got some things in the pipeline.
I've re-worked my "bubble bling" soaps. They were okay, but they were a little blah in my opinion. I've been playing with micas mixed with glycerin to create these really cool effects. They're still a work in progress, but they're much improved over the plain ones I initially did. I also scented these with pure patchouli essential oil. Patchouli in my opinion is one of those take it or leave it scents. You either love it or you don't! 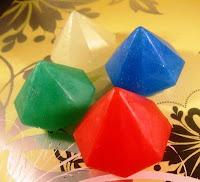 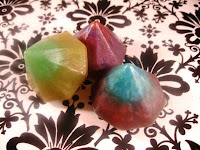 AFTER
I've also re-introduced my bon bon soaps. I made these last year, and they did well in my Etsy shop, but for some stupid reason, I stopped listing them. Well, they're back, better than ever. I've also made some improvements to them to make them look more realistic-YUM! 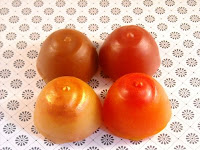 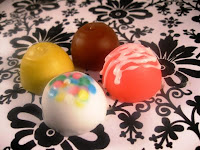 By Patrice-The Soap Seduction at 11:42 AM

Those bubble bling soaps are way cool! Love how you've tweaked them.

I love those bon bon soaps. They are awesome.


What are your top 5 fave essential oils??:)

Your soaps are beautiful - Glad to hear your humble beginings were with Melt and Pour - because that's the type I make, which means soon I will be a great soap artist following in your footsteps :o)

They both look wonderful, sometimes, you just have to take a break, clear your head and start again. I just got over a creative slump..hate em! But you did marvelous!

Thanks for all the compliments gals!

Little Shadow: I have a love/hate with patchouli. It depends which day you ask me:-D. Right now, I love it (obviously), but if I'm in that weird place, YUCK!!!

My top 5 EO's? I'm really new to them, so I have to stick with the basics right now: orange, lemon, lime, basically anything citrus. I'm studying them all though. Any recommendations?

~If your a citrus-y fan I would try Bergamot or Litsea Cubeba. They both have a citrus-y quality, and have the staying power in c/p that other citrus e/o lack.

My personal fave is BB's pathcouli, they have a great lavender e/o as well, it's not all grandma-ish...Both e/o's are pretty well worth their price for the quality they add in the finished product.

Who Is This Chick?

Love Handmade Soap? Check Out These Blogs Too!

All of my soaps are:

Yes, I Have An Etsy Shop