Soap makers and soap lovers: Does all of your packaging look the same or do you love a certain aesthetic? I'm torn between clean minimalism and making a statement. See, the problem is, some of these options would increase my shipping charges, and I definitely do not want to do that. Here's a little sampling: 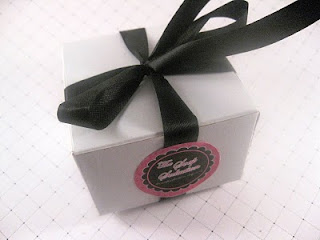 This one's cute. But only the soaps I make in my silicone brownie pan will fit in these boxes. Plus it adds extra weight to my shipments. 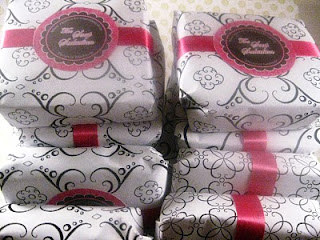 This is my preferred method of packaging. Clean. Simple. Elegant. The paper is thin so you can smell right through it. And the paper can be recycled or reused for other projects...but...you can't easily see the soap! 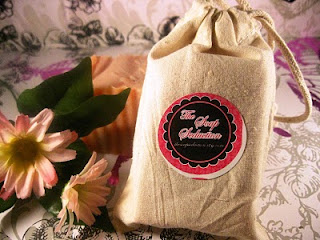 I love these muslin bags. They give the soaps a real exclusive feel, and you can re-use them for storing your trinkets and  makeup and stuff. The only thing is, I'd have to use tags for labeling. They don't look pretty to me just slapping them on the bags. 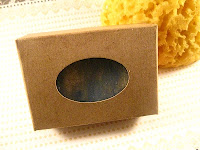 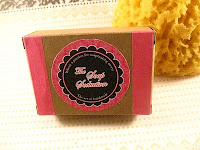 I love these soap boxes. But, again, they'll add weight to shipping, and only the soaps I make in my silicone loaf pans will fit in them. 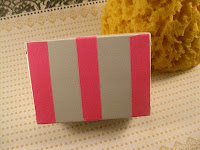 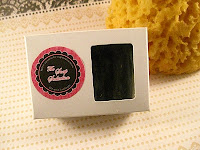 And, lastly, these uber-convenient shrink wrap bands. I love that it covers all but the top of the soap, icky hands won't be all over the soap, and you can see the soap in its full glory. I really like these, but they just aren't "pretty" lol! 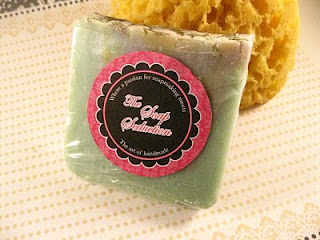 So, whaddya think?
By Patrice-The Soap Seduction at 8:35 PM 10 comments: 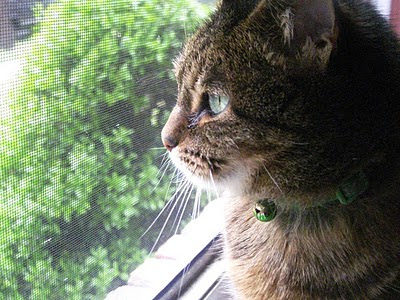 I had to snap this pic of my baby looking at a passerby. I love how she stares at something or someone. I know she's thinking, "WTF....."
By Patrice-The Soap Seduction at 7:25 AM 7 comments:

Using a vanilla fragrance can be a killer in your soaps (cold processed and hot processed. Stabilizers only work for me in melt and pour.)-especially if you have a certain aesthetic in mind. I learned that the hard way, but as I mature in my soap making ventures, I've learned to go with the flow and work with, instead of against, the brown-headed beast! 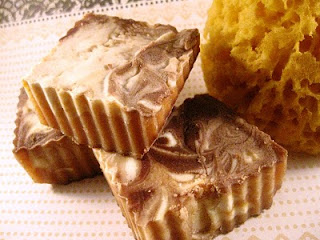 (As of this post, the soap is now twice as dark-and delicious)
I intentionally added a white swirl (unscented of course) to this soap because I knew it would turn doo doo brown as it cured. I also added powdered milk to this recipe-my first attempt. I added 2 tbsp to a little bit of my soaping oils, mixed very well, then added that to the main batch at a light trace. It reminds me of a cheesecake brownie, but it smells like a sweet, sticky bun. Since I'm weening myself off of all these sugary delights, I might as well shower with a soap that smell like them instead.
By Patrice-The Soap Seduction at 10:55 AM 9 comments:

I Call This One Loofapalooza 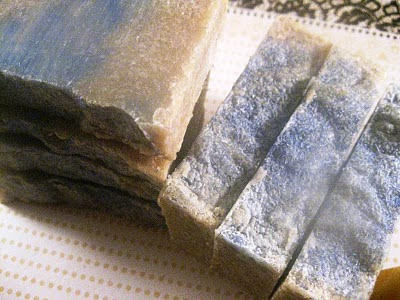 (I was too lazy to re-shoot these...)
for a few reasons:
I'm slowly getting out of my rut. Slowly.
By Patrice-The Soap Seduction at 9:13 AM 2 comments:

Email ThisBlogThis!Share to TwitterShare to FacebookShare to Pinterest
Labels: CP soap making, Loofapalooza, stuff I'm up to, The Soap Seduction

Karma's A Bitch, Aint It?

I really believe this because I've seen it happen to others, and I've experienced it on occasion myself believe it or not. Oh, about a few bitch posts ago, I complained about crafters and artisans who took ugly-ass pictures and expected people to buy their stuff. Boy, did that remark bite me in the ass because my pictures lately have sucked! I blamed it on the lighting, the weather, the soap....Now, that I've conceded, my pictures have gotten remarkably better. Here's a sampling. They're not magazine-worthy, but a vast improvement. 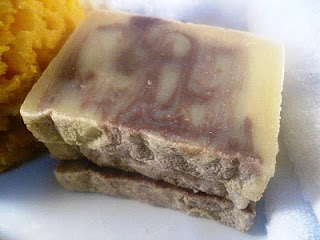 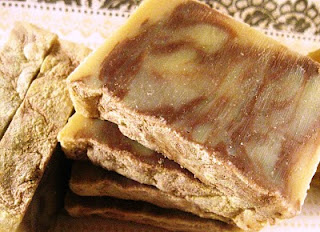 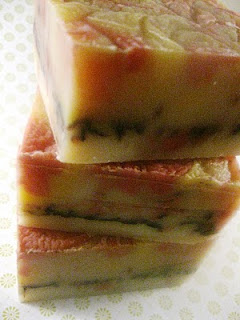 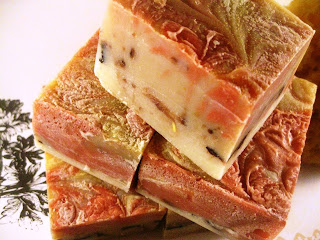 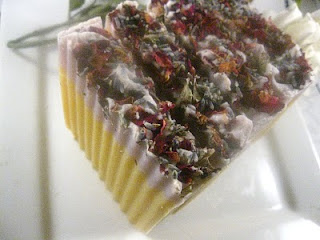 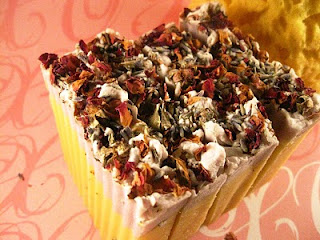 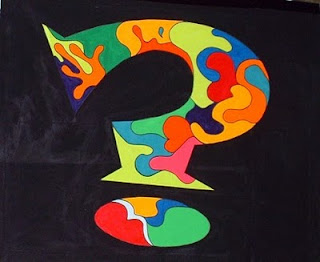 (Image courtesy of Allencentre: Wikispaces)
I just wanna know why you visit this blog? If you're an Entrecard dropper, there's no need to reply. I'm looking for those who actually visit often because they like to see what I'm up to. Do you read this blog because you're interested in soap making or do you just want to see what I'm talking about now? Okay, I'll confess: I bought one of those I'll evaluate your online presence and tell you how you can improve, blah, blah, blah... services, and one of the feedback I got was that my blog was not very interesting to the "non-soap maker" and that I should cater toward my target audience (Okay, that's another lesson: Who is my target audience?)

So, if you would take a moment and just let me know why you visit, I'd really appreciate it:)

ps-This is my 500th post: Holy Shit! I really do run my mouth for someone who's actually very shy in person.
By Patrice-The Soap Seduction at 7:23 AM 18 comments: 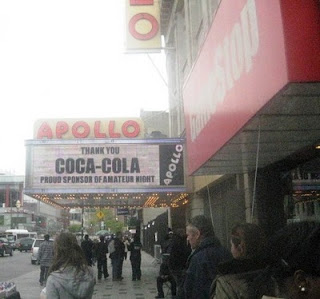 I'm back! I spent the last 5 days in good ole Harlem, USA, and let me tell you: Whatever preconceptions you have about Harlem, just throw them out the window! Harlem is now more integrated than the south-and it's filled with all kinds of mainstream establishments and ethnicities! As a matter of fact, I think I saw as many Europeans than black, lol. It was a bit of a culture shock-but a pleasant one. I have never visited a neighborhood where you can literally do all of your shopping in a 5 block radius: You've got Old Navy, Staples, H&M, Magic Johnson Theater, Starbucks, and the world famous Apollo Theater all within walking distance of my sister's home. Oh, and for those of you who know NADA about New York (like me), did you know that Harlem is actually a part of Manhattan? It's not an actual city or a burrough.
GTFOH!! 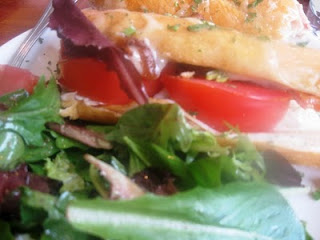 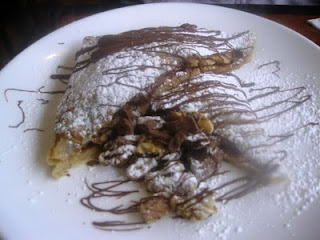 (This crepe was my sister, not mine-too dough-y for my liking.)
You know, while in New York, you must go out and eat! It doesn't matter if it's the neighborhood bodega or the chic little eatery in midtown. Going out to eat is an event (and a month of conscious eating well and exercising all shot to shit in less than a week!) I ordered this club sandwich for lunch, and when I tell you that it was orgasmic, I am not exaggerating! It was the most delicious club sandwich I've ever had, and it was served on a baguette with a side of mesclun (sp?) greens. O-M-Gee!!!!! It was sick. The bacon was so meaty and tender-not crispy, crumbly, and non-existent like some club sandwiches. Then for my last meal of my trip, we had to go to Sylvia's! It was....SICK! Sylvia's is old school soul food-greens that taste like meat, lol. Kick-ass potato salad. BBQ ribs so good, you'll slap yo mama.....Enough food for two meals-maybe three for you bird-like eaters... 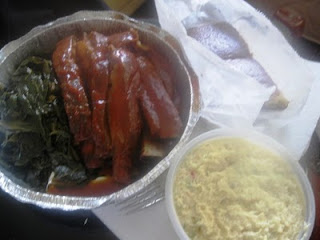 (Yes, I ate every damn morsel!)
My sister also booked us for these "free" makeovers at Dior in Macy's. Macy's is always a freaking madhouse-no matter what time of day or year that you go. They were doing some kind of garden or floral something, and just imagine all the regular shopper/tourists paired with these garden enthusiasts/tourists: PURE D. HELL! Anyway, after being spackled with over $100.00 worth of product and gunk (by a chick who knew nothing about what colors to use on black skin), I ended up buying $54 worth of crap. I cannot BELIEVE I paid $24 for a tube of mascara. Slap me now! I felt obligated ya know? That makeover wasn't so free after all... 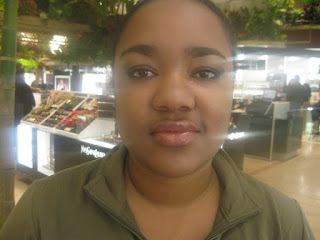 (My sister Myia after her over-priced makeover.)

So that was basically my trip-eating, but you do a lot of walking. I'll end with a shot of this disgusting billboard I spotted on the block. How can you be a person of God and preach this kind of sentiment? What happened to separation of church and state? What happened to human kindness and decency? What happened to getting your facts straight before advertising this garbage? 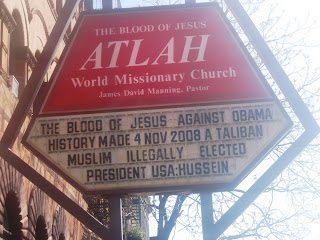 Absolutely Disgusting!
By Patrice-The Soap Seduction at 5:02 AM 3 comments: 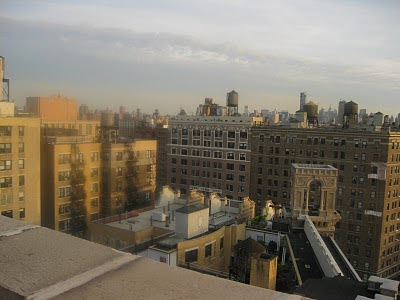 So I'm off to my annual trek to NYC-Harlem this time (Bill Clinton, holla!!)-to spend some time with the sis and her man (can you say 3rd wheel????) It's really not a pleasure trip although I'll be sneaking in some. I'll be blogging about this special journey on my Phat By 40 blog in the coming weeks. I wish I could just snap my fingers and be there. I hate traveling. I much prefer staycations!
By Patrice-The Soap Seduction at 8:38 AM 4 comments:

Coming Soon To A Computer Near You... 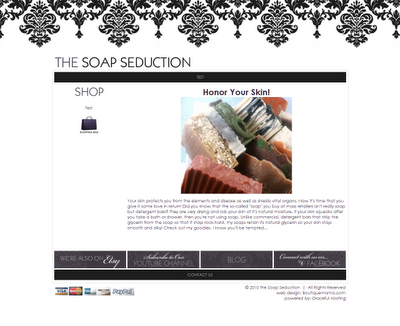 I have a confession to make: I'm getting so fed up with these online selling venues-all of 'em! Yeah, they're great for the instant traffic, but the fees are ridiculous, and I wonder how much of "my" traffic is diverted to other shops once they reach me. With that being said, I have decided to re-launch my own, independent website. Why? Go back to the second sentence of this post! Seriously though, I am determined to establish my brand and identity, and, I need the creative freedom to do and say what I want without having to follow someone else's rules.

Building a website from the ground up is hard work! I haven't even put it dent it yet, and I know the finished product will still be a work in progress. I wanted the site to be very clean. Here's just a peek of what's to come. My goal is to be ready to go live by Memorial Day or sooner.
By Patrice-The Soap Seduction at 10:44 AM 15 comments: 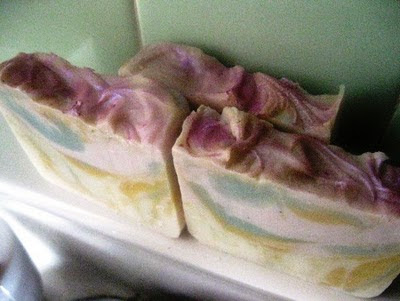 Fresh off my April Fool's coup, I almost forgot about this little number. I am making some major changes at TSS, and it's a lot of work. I hate work, lol. This is supposed to be fun. Anyhoo, I'm still playing with my newest obsession, that brushed-mica look. This soap was looking too much like Melony Gardenia even with the pale pink inside. I solved my conundrum (I have a co-worker who uses "big" words like conundrum to try to make herself sound extra intelligent...) by bringing out the pink by brushing the top with this magenta-like mica. I'm liking it now. Oh, I forgot to tell you what it smells like. Duh...I blended peppermint, patchouli, grapefruit, and fir needle essential oils. Umm, it's a little different. Name is pending..

Next up, I'll have a sneak peek of my new website. I'm so psyched!
By Patrice-The Soap Seduction at 10:35 AM 7 comments:

The Soap Seduction Is Closing....

I’ve been doing some serious thinking my friends, and I’ve come to the painful decision to close shop. This venture has taken up so much of my time and energy, that I have no identity outside of The Soap Seduction. I’ve made so many wonderful friends, and I thank you all for your friendship, your laughter, and your encouragement. With that being said:
APRIL FOOLS!!!
Made you look, dirty crook, stole your mother’s pocketbook! 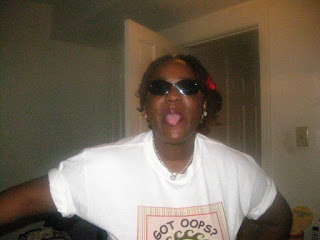 Who Is This Chick?

Love Handmade Soap? Check Out These Blogs Too!

All of my soaps are:

Yes, I Have An Etsy Shop